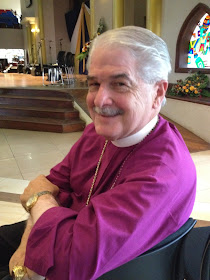 Speaking at Forward in Faith’s regional meeting at St. Vincent’s Cathedral this August, three FIFNA bishops spoke out forcefully against the ordination of women.

Bishop Jack Iker of Fort Worth was first to speak, expressing “dismay” over the continued ordination of women in the Anglican Church in North America (ACNA). Referring to ACNA’s decision to allow for “two integrities” regarding female ordinations, Iker stated:

I am extremely dismayed, because the [ACNA] College of Bishops has decided to fudge the issue by allowing ‘two integrities.’ There are two practices, one is apostolic, universal, scriptural, the other is schismatic, rebellious, feminist and revolutionary. Begun by the Episcopal Church illegally and forced upon the Church.

Iker then said that Forward in Faith, the Reformed Episcopal Church and the Anglican Mission in North America “came into ACNA” believing “we’d go into a theological discussion of the issue and move the right way forward. Now we’re being told that we signed on to ‘two integrities’.”

This, stated Iker, was untrue, “revisionist,” and a continuation of “something you know is divisive, that continues to divide the church and create impaired communion… The beginning of the breakup of the Anglican Communion was the ordination of women. We’ve been dealing with this for 40 years and it continues to be a divisive issue.”

“I do not have an answer,” the bishop concluded, “But we did not sign on saying we would accept it.”

The retired Bishop of Eau Claire, William Wantland, followed the Bishop of Fort Worth, emphasizing the necessity of consensus concerning an innovation of such magnitude.

Quoting the late theologian John McQuarrie, Wantland stated, “If this church has the authority to make this change it can only be done with overwhelming consensus, two thirds majorities across all Provinces.”

“The idea of the ordination of women was first broached at the 1968 Lambeth Conference and there was to be a moratorium between then and Lambeth 1978,” said Wantland, “During that time they’d study it, and all agreed. But by 1976 New Zealand, Canada and the U.S. had all adopted canons allowing it, in total disobedience to the Lambeth Conference.”

The bishop finished by referring to the symbolism of the priest at the Altar.

Bishop William Ilgenfritz of the Missionary Diocese of All Saints spoke next, expressing dissatisfaction with ACNA. For Ilgenfritz, the ordination of women pointed to a deeper problem within the Anglican Church in North America.

“The ordination of women is but the tip. What I see emerging is a confessing protestant church,” said Illgenfritz, who went on to outline a series of issues.

We’re looking at a deeper problem, individualistic protestant disbelief in the Real Presence, Sacraments and the Church herself… the Real Presence, baptismal regeneration, if a group within ACNA doesn’t believe that, I have nothing in common with them.

Whether and to what extent the Anglo-Catholic bishops of Forward in Faith North America will be able to live in a state of impaired communion with ACNA over female ordinations remains to be seen.

As it is, the ordination of women continues to divide the church at a fundamental level, undermining mutual recognition of holy orders and sacramental communion itself.

Forward in Faith North America and this magazine uphold the catholic faith given by Christ to the Apostles and with it, the all male priesthood.